Tired. Busiest week I’ve had in a while at work. Two more weeks and it’s vacation time. Expect my site updates to surge. Stopped by
Best Buy on the way to the airport to try to cheer myself up. Bought ”Sex in the City: The Second Season” and the ”Britney
Spears Complete Videos Collection.” I figure I’ll be able to watch each at least 30 or 40 times each. Investments are good.

I have not danced at all this year, if I remember correctly. A really good night of dancing in my past has included
hanging out with friends at Number’s Night Club, enjoying
a frosty Heinken or a gooey Alien Secretion or a tart Rum Punch or even the cheapy 25 cent draft beer they serve before 11 PM.
My plane lands at 10:57 PM in Houston, although I doubt I will be up to clubbing once I am done doing The Airport Thing.
I do plan to attend the New Year’s ball this year at Number’s if possible.
Last year’s party at Pike & Adam’s was memorable, although I want more. Specifically what I mean by more is… they have a
balloon drop at midnight. Some of the balloons are filled with money. Money=goodness. Nothing better than being paid to make
an ass of yourself as you hop up in the air above all the short goth people and wildly grasp at inflated latex filled with coin.

Back. Had to stop typing. Some dude sat next to me and started spying on my screen! Doesn’t he know what I type here is
top secret and never to be revealed never ever ever? Instead of sitting at the Philly Airport terminal where I started this entry, I
am now climbing toward a cruising altitude of 35,000 feet after leaving my brief layover
in Atlanta. Next time that happens I plan to start typing total B.S. in to see if I can get a reaction. Maybe I’ll pretend that I’m
really from another planet and my plan has been going remarkably well. Hmmm. Well, wait a minute, that would actually be
true.

I need my hair chopped off this weekend. I now see the advantage in the all bald look. Too bad my head is so huge. I’d look like a
Talosian if I went bare headed. All you Trekkies know what I’m talkin’ bout. I know they have Rogaine and other fine hair growth
products on the market, but maybe it’s time for No Grow or Hair Just Right to go on sale. If you could get the perfect haircut and then
stop your hair from growing anymore, that would totally rock. Unless, of course, if your hair starts to degrade after not growing for
10 years. That part would certainly suck. Bleah. See? This is why we need clones. To test my jacked up hair growth
stopping remedies. 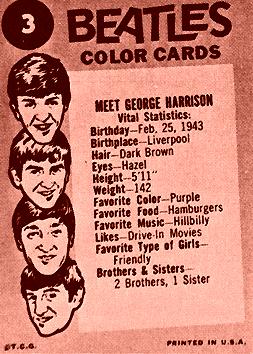 The loss of George Harrison of course leaves us with only two of the original Beatles. I doubt Paul and Ringo will ever try to
form the group again now that they’ve been reduced to 50% power. I will miss George and this puts a serious dent in my
plans to see each of them separately perform. Guess I will have to step up and catch Paul and Ringo before they leave.

Yeah, I know. Depressing entry. Bleah. I actually dreamt of a new layout style for this site. If I can scrounge together the free
time for it this weekend, you will see some navigation improvements as well as the return of The Ex-Files section with more detailed
analysis of why I’m still single at 32. I also plan to import my ”Back to the Future 4” parody again using my FireWire, A.K.A.
iLink, A.K.A. IE1394 port. Technology kicks ass. This will have to be cleverly balanced with my completing the long overdue
Mark Wahlber Fan Club section that I am coding for free. I spoke with Jim Wahlberg, Mark’s bro, on Wednesday. He runs the
Mark Wahlberg Youth Foundation and has somebody from Nerve Break something or other (a competing web vendor of my company, I’m
sure) doing some web pages to promote the foundation. The Nerve people are supposed to get in touch with me, but have never tried.
I may have to track them down myself. I have some ideas
about how Jimbo can combine Mark’s fanclub with the foundation, but I’m keeping my lips sealed til’ I can talk to them again.

Talked to the mystery girl that deleted her AOL website after we talked. She was not pleased by my commentary. Apparently she
just deleted her site because she didn’t want it there. I admitted that I thought she was hitting on me. She told me she gets
misread all the time. I told her flat out that I was going to hit on her from now on. There is no escape from The Super Genius
Love Machine. And just as soon as I figure out exactly what the Super Genius Love Machine is, I’ll tell you all about it.
Maybe.

Thanksgiving came and went. Ate dead turkey at the parent’s. After the big meal I crashed on one of their couches. One of them smells like chihuahua pee. Didn’t
sleep on that. Not planning to return there for a nap again.

Finished about 99% of all renovations on the kitchen. Still need to install light fixture and paint the recessed lighting thing. The other end of the kitchen needs tiling and some
TLC. I call it The Ugly Side. Next step is getting siding for the house. Last steps include glass patio, hot tub, LCD projector and Oompa Loompa room up in the attic. Lots
of space up there getting wasted. Might as well turn it into a room. Considering installing a hatch on the outside of the house to get into the attic room. Wondering if anyone
has ever made their house look like a pirate ship. Wondering how quickly roommate will be scared away when I convert exterior of house into aforementioned pirate ship.

These are pictures I took in New York City on September 16th 2001. I haven’t posted them until now mostly because I haven’t had anything
else to procrastinate over (other than installing aforementioned light fixtures for my roommate). Enjoy this brief glimpse into the city that
never sleeps.